Ancestors' Lessons to Thrive and Survive 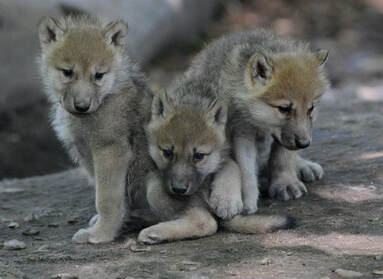 Today I was brought into a world where collaborating and unity are two main values that have helped my ancestors and have kept our family alive till this day. They taught us that in order to survive in this cruel world, working with the other members of my family was essential to stay alive and keep thriving; and the path to solitary is a direct path to death. I have learned that in a tough way. One day when I was very young, I could not figure out how to project a perfect howl yet and while I was walking with my siblings, we heard a great thick growl. One that injected strong feelings of horror in us. Our curiosity level boosts up and with careful steps between the grass we were approaching to where the sound was. After few slow cautious steps between the bushes, we saw a huge grizzly bear that was in the middle of a fight with an adult wolf. Both were growling but the bear growl was scarier, and within few encounters between the two, we saw the bear knocking the wolf on the ground and closing his strong jaws aggressively on the wolf neck. Blood started pouring heavily to the ground, and the adult wolf dropped dead without any movement. Beside the fear and the stress that I have encountered at that time, that incident showed me why my ancestors valued unity and took it as a way of life rather than the path of solitary.

Our ancestors and our parents have always taught us to respect the other predators that are living with us in our territory by understanding their power and not invading their areas until we are forced to do so. That is another way to help maintain our population as wolves. Until one evening, the wolf joined his group to form a pack led by the alpha wolf, getting ready to hunt. As the alpha leader started running the wolves followed him looking for a prey to feed on for the night. They kept running across the woods with no luck yet. They kept running until they encountered two creatures that are walking on two legs each one of them was holding a long piece of metal. The alpha leader and some other wolves perceived them as a threat. With a fierce look of the wolves, showing their front sharp teeth and consistent growl they were ready to attack those creatures. As soon as the alpha leader and the three other wolves were approaching to attack, a strong loud sound and a red yellow flash comes out of the long metal pieces that was held by these two creatures. I was at the back of the pack and it was dark, so I could not see what was happening. After few minutes from that sound, one of the wolves who was nearby started to howl, announcing the death of the leader and the three wolves with him. That strong loud sound started to appear again in a rapid way: pew, pew, pew. The pack unity got scattered and I ended up with one of my pack members running towards a different trail. We kept running until we reached an area far away from our territory. We were starving and as we were walking and sniffing, we got out of the bushes to see the huge number of cattle surrounding by a wooden siege. For us it feels as if we found a great treasure. We rushed to it and started attacking some sheep there and killing two of them. After feasting on one, we dragged the other one little far back to the woods.

The next morning, we went back to our pack, and started telling them about this heavenly place that has a plethora of food resources. I did not think that this heaven would bring hell to my family later. The next evening, I walked by the next recruited alpha wolf guiding him to the place I found. This time our attack on the farm was very brutal, there were more than 10 starving wolves who have not eaten for few nights. They rushed and jumped over the siege taking down any prey they face. Howling sounds started to raise announcing the accomplishment of our hunting mission. Our attack left couple injured and dead sheep in the farm. We returned to our home and planning to come back for the next hunting mission. On the way home we spotted another farm nearby that has plenty of cattle as well. We were surprised when we saw another pack of wolves already knew about this spot, and they been hunting there recently as we did. After few weeks other wolves’ packs started to know about this heavenly spot as well. Sometimes we arrive to the farm and find some marks of other wolves’ attack. This issue did not bother us at all because there were other farms nearby that we could feast on too. We kept repeating the same process within different farms around the city of Yellowstone.

The Rise of Hell
On one night while we were going to our heavenly spot for food hunting. As the pack and I jumped over the cattle siege. I become terrorized when I saw five gray wolves are dead on the ground. One of my pack members howled warning the others about a potential threat. Pew, pew, pew, that was another rapid sound that joined the sound of the howling. Red and yellow flashes started to appear with this creepy sound coming from different directions. My pack members started falling dead to the ground one after the other. I tried to escape this unpredicted ambush as quick as I could. Some members who got the howling warning sound, started running back to the woods. I followed them not knowing if I would make it or not, but all what I think about is that I cannot look back.
The following day I woke up feeling sad over some of my sibling who got shot at the farm. I know that it is not safe anymore to go back there and hunt. As I was going by the day doing my daily tasks, checking on my family, scan our territory for any potential threat and playing with the young pups of the pack…
All of a sudden I heard that scary sound again pew, pew, pew. This time it was so close to our territory.

There were plenty of those creatures who walks on two legs known as man. They were holding their long metal pieces, and they seemed as if they were targeting any wolf they see. We started running immediately and kept shooting at us. Our pack got scattered again each one of us went into different directions. The shooting did not stop at all. However, I hardly managed to escape again. Stress, worry, and fear were the dominant feelings over me. I knew at the same time if I start howling now, I will likely get myself exposed to those savages. Time was passing and overthinking was killing me. Howling is our main method of communication and until now I could not hear anyone yet. I want to know who survived and what happened to the rest of my pack, especially my sibling. I just decided that it would be safe to wait till the evening and then go back and check on our spot. When the night came, my curiosity level was high, I started running towards my home at the same time I was very cautious. When I got close, there were my pack members dead on the ground. Blood stains were all over the place. I started sniffing to recognize my sibling if they were among those who are dead. Sadly, five of my siblings could not make it and young pups are killed too. Even though this scene was very tough to witness, I still had some hope left, that I would be able to find my other three siblings. Heavy steps with heavy breath ..
​
I walked around the territory and with small glimpse of hope looking for my siblings.
At that point I did not care about life anymore, and all of a sudden I hear this beautiful calling … I heard another wolf howling. I started to recognize that sound it is not someone outside the pack. It belongs to my sister. I was not believing what I was hearing, I thought for a second if I was dreaming. I rushed to the sound location as fast as I could. There was my sister she made it free of any injuries. I greeted her with warmth robbing my head all over her neck and her chest, as I did not see for a long time. And from nowhere my brother showed up, he got the howling call as well. I was not only happy that they were alive, but I also was happy because I know that the gray wolf race will survive and thrive.
​ 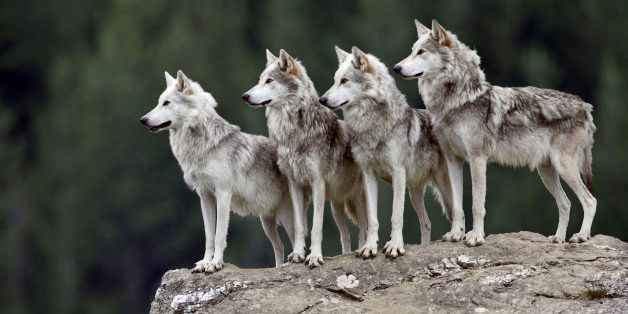 Retrieved from: https://www.huffpost.com/entry/whats-the-matter-with-ida_b_4571120
My other sibling and I were the only ones that survived this massacre in Yellowstone. Since I am the oldest and strongest one among them, I become the leader known as the alpha wolf of the pack. In this disaster one of my top priorities was to keep our family safe and make sure that our race as a gray wolf keeps thriving. Therefore, I decided that it will be safe for us to move away from our ancestors’ land. I lead my pack far away from the place where I had shared plenty of wonderful memories, which now become a place of the most tragic events that I will never forget. After few months passed by, I become a father of eight strong pups. I have passed to them the knowledge and lessons that my ancestors have passed to our race, so we can thrive in this earth. Hoping that one day they will be strong and wise enough to lead the pack and take them back to our ancestor’s land. I have faith in them to be able to protect the gray wolf race as well as maintaining our role in the ecological system.